Copper pipe has light weight, good thermal conductivity and low temperature resistance. It is commonly used in water pipes, heating and cooling pipes (such as condensers). It is also used to assemble low-temperature pipes in oxygen production equipment. Small diameter copper tubes are usually used to transport pressurized liquids or as pressure measuring tubes for instruments.

Copper pipe is the best choice for installing water pipes, heating and cooling pipes in residential and commercial buildings. 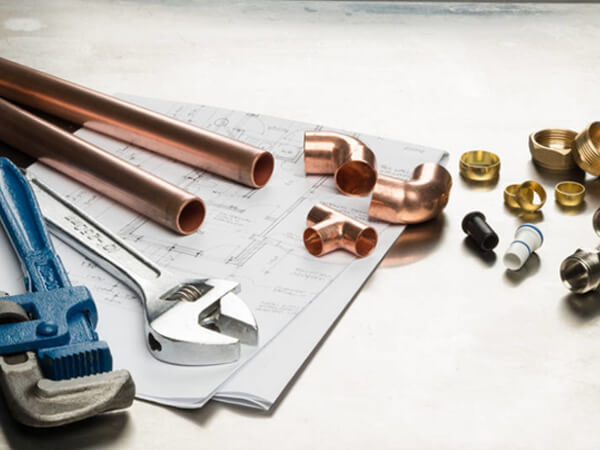 About the advantages of copper pipe：

Copper has stable chemical properties including cold resistance, heat resistance, pressure resistance, corrosion resistance and fire resistance (the melting point of copper is as high as 1083 ℃), and can be used in different environments for a long time. The service life of copper pipes can be as long as that of buildings, or even longer.

2.Copper tube is safe and reliable

Copper pipe combines the advantages of metal pipe and non-metal pipe. It is harder than plastic pipe and has the same high strength as ordinary metal; However, it has more flexibility and high ductility, and has excellent anti-vibration, anti-impact and anti-frost heave performance.

The linear expansion coefficient of copper pipe is very small, which is 1 / 10 of that of plastic pipe. It can resist fatigue. Under the condition of temperature change, excessive expansion caused by heat and contraction caused by cold will not occur which will lead to tube fracture.

These characteristics make the application of copper pipe in cold areas have great advantages. Due to the large temperature difference between morning and evening in cold areas, ordinary pipes are easy to break due to expansion caused by heat and contraction caused by cold. Some pipes are claimed that even under – 20 ℃,they will not be brittle, but they cannot bear the working pressure, and their service life is very short, which has no practical significance. Although thermal insulation measures can be taken, it is difficult to avoid low-temperature storage and installation during transportation. On the contrary, the properties of copper tubes are the same at – 183 ℃ and at room temperature.

3.The copper pipe is sanitation

Copper pipe is not like plastic pipe, which contains various modifiers, additives and other chemical components.

Biological research shows that Escherichia coli in water supply system can no longer reproduce in copper pipe. After being placed in the copper tube for 5 hours, more than 99% of the bacteria in the water were killed.

The copper pipe has a compact structure and is impermeable. Harmful substances such as oil, bacteria, viruses, oxygen and ultraviolet rays cannot pollute water quality through it.

In addition, the copper tube does not contain chemical additives and will not burn and release toxic gases. The recycling of copper is conducive to environmental protection and is a green building material for sustainable development.

4.The copper pipe is firmly connected

5.Good for your health

Copper pipes are beneficial to health, water saving, antifouling and sterilization. When decorating the house, few people asked about the water supply. In fact, the material of water supply pipeline has a great impact on people’s health.

In the past, galvanized steel pipe was commonly used in residential water supply in China, which is not only easy to breed bacteria in the water, but also easy to be corroded by the atmosphere, soil and water, causing secondary pollution to residential water. But copper pipeline has strong anti-corrosion ability. More than 99% of the bacteria in the water enter the copper tube and disappear after 5 hours. The copper ion has a strong bactericidal ability. For example, a very small amount of copper in water can kill mollusks, such as snails.

Copper will not produce toxic gases or other harmful substances or other wastes in the regeneration process. This “friendly” to the environment is not possessed by other materials. Due to the above advantages, cold and hot water copper pipes for construction are widely used in developed countries and regions in the world. With the continuous growth of China’s understanding of copper pipes, the use of copper pipes in architectural design tends to be an international trend, and copper pipes will bring a new concept of healthy pipes in the 21st century.

Need an expert? you are more than welcomed to leave your contact info and we will be in touch shortly

ASK FOR A QUICK QUOTE

Manufacturer and exporter of TV wall mount and AC brackets with 15 years’ experience located in Chinese largest production base.